It has been so long since my last update and a lot has been going on!


The biggest news is the birth of my daughter.  Madeline Nicole Penkrot was born on April 1st of 2011 and has continued to be healthy and happy.  I look forward to getting to know her as she grows up. 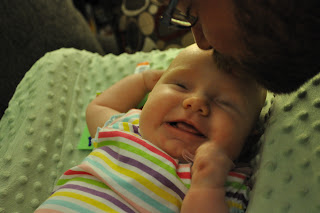 Performances
This past spring saw the premiere of Interfacial Colloid on March 25th at the Midwest Graduate Music Conference at the University of Wisconsin Madison.  Many thanks to Jerry Hui and the ensemble for a wonderful performance.  The recording will be up on my website very soon.
The following night of March 26th saw the next performance of Interfacial Colloid as part of the Society for Composers Iowa Chapter concert.  Dan Houglum conducted Rolando Gaitan-Hernandez (flute), Marjorie Shearer (clarinet), Emily Rolka (violin), Jeehyung Moon (cello), and Younjung Cha (piano) in a spirited performance.  Two weeks later, they performed the piece again at the Exchange of Midwestern Collegiate Composers on April 9th.  I was unable to make the performance but was thrilled to hear the response and want to thank the performers for their time and dedication.  Recordings will be up on my website very soon.
I had the premiere of my first fixed media piece Apoplexy at the Electronic Music Studio of the University of Iowa concert on May 1.  It was a much different experience to hear my music in a large dark space.  I would expect to expect a few more acoustic works incorporating live processing and fixed audio parts in the future.
Upcoming Performances
Shooting Snowburst Spectacular Silhouette - August 19th, Community Music Center, San Francisco
For soprano, clarinet, percussion, cello, and piano and using an amazing text by poet Thea Brown.  This is part of the Melos Music 2nd Annual New Music Concert.  This is going to be a great concert if you are in the area.  (http://www.melosmusic.com/sfconcert2011.php) 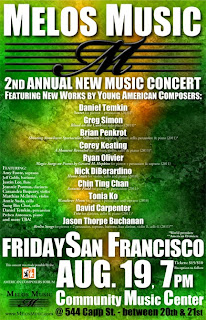 Angelus Novus - November 9, Composers Workshop concert at the University of Iowa.  For solo flute, I have been working with Nora Epping on this since February, and am excited to have it premiere.  The odds of a performance before this is pretty good - I will let you know.
Apoplexy is scheduled to be played at the ChuGye University for the Arts this November in South Korea.
Olympus: Three Miniatures of Greek Gods has been selected by the Juventas New Music Ensemble (http://www.juventasmusic.com/) for performance.  Stay tuned for updates.
Performance
I have decided to expand my repertoire for guitar beyond rock and jazz and am looking to perform, beginning this Fall.  I have recently been looking at Reich, Murail, Romitelli, and Takemitsu and would expect to see a performance of one of these in the next few months.
I am also currently looking to put together a group of performers to perform graphic scores, improvisations, and musical processes.  A name and repertoire are in the works.
Other News
I had the good fortune to attend June in Buffalo this year.  I had a wonderful time and returned invigorated and excited about composing.
I was named the business manager for Melos Music.  I am thrilled to be working with a group of such talented and driven people.  I look forward to the future of the group.
I was named the Theory instructor in the certificate program at the Preucil School (http://www.preucil.org/).  I had a wonderful time teaching at their Chamber Summer Camp in June and look forward to meeting the kids this Fall.
Posted by Brian Penkrot at 10:58 PM No comments: